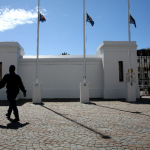 It’s been close on a decade where we’ve watched the economy struggle and toil as deterioration in both the domestic and global environment served to tighten the noose around a stretched fiscus.

Our calendar entries in recent years have been littered with dates that are singled out as seminal or for dramatic purposes “Damascus” moments in the South African story over the past few years. Not to break with that tradition, Finance Minister Tito Mboweni’s medium term budget speech next month pretty much falls into the same category.

Coming just four months after his emergency budget in the wake of the Covid-19 pandemic, the speech will be closely watched for just how the department will manage to balance the need for fiscal restraint, the reduction of public sector wages and stimulating an economy sluggishly emerging from the IMF coined termed of the “Great Lockdown.” It’s important that Treasury along with all affected ministries are backed in their efforts at fiscal reform that by its nature will come with some rather difficult political choices. It’s an imperative if we are to win back confidence and breathe life into what has been an impressive investment drive by President Cyril Ramaphosa over the past two years. There’s a promise of more than R300 billion worth of pledges on the table that needs to be unlocked in a world where many nations are clamouring for any sort of investment in an even more competitive Covid-19 world.

Accepting this reality, the state has made some undeniably positive steps. Treasury has gotten signoff from Cabinet for “Operation Vulindlela,” which is their push to implement the department’s economic policy proposals that were championed by Mboweni in August of last year. As business we came out in support of those proposals as they were centred on structural reforms in areas such as energy, where our over reliance on Eskom has time and an again proved our Achilles heel. It is in the medium term budget, where we’d hope to see some tangible signs of progress in following a path the governing party  has also endorsed.

The “mini-budget” fits into a larger reform push by government as it launches its economic recovery plan post the National Economic Development and Labour Council process and document. We expect the R230-billion of spending cuts promised for the coming two years to roughly be delivered but it may very well be offset by state-owned enterprises spending and lower revenue.

There’s been much debate in the media in recent weeks about the fate of SAA that has just gone into care and maintenance. Wherever one stands on its future, one thing couldn’t more certain; its fate needs to be resolved. As the business community responsible for our vast number of employees, we can understand the state’s “moral obligation” to paying the severance packages for SAA staff that amount to just over R2 billion. Allocations above this would be worrisome for an investment community and South African public tired of bailouts gobbling scarce public budgets. In the long-run, we’d hope the state finds a way to exit its investment in the airline and concern with itself with ensuring we have a competitive industry as a whole.

We need to get back to a position where the South African budget is used for investment and capital spending because of its multiplier effects, not merely for wage growth in the public that outweighs the private sector and bailouts. Operation Vulindlela is a path to that future, the deputy finance minister in David Masondo tasked with driving it will need political support. The country needs more money to play its role as an enabler of big ticket items such as infrastructure which means growth that is good for business and good for social support.

In what has to be a shared journey between state, business and labour to growth rates above 2% and higher to reduce our unemployment rates over the next few years,  infrastructure spend will be a key component. We expect to see some detail in the medium term budget and in the investment conference to follow in November on the different opportunities that exist. Government should be an enabling role through concessions and regulatory amendments to allow the private sector to start building its own infrastructure, steps that are fiscally neutral but growth positive. This can be done for energy through embedded generation, but also on rail and ports where private operators are willing to put in infrastructure if regulations permitted it.

We’ve long spoke of the electricity generation capacity that lives in the private sector that would help Eskom meet demand as it deals with a decades long maintenance backlog and the shutdown of some of its older coal-fired power plants.

Once again the stage is set for yet another country defining statement on the budget and government’s plans with a shrinking revenue base. We can no longer waste time with promises, action is required by the state if we are to avoid falling deeper into “junk” status. The state has to now convince us of its political will to make the difficult choices.