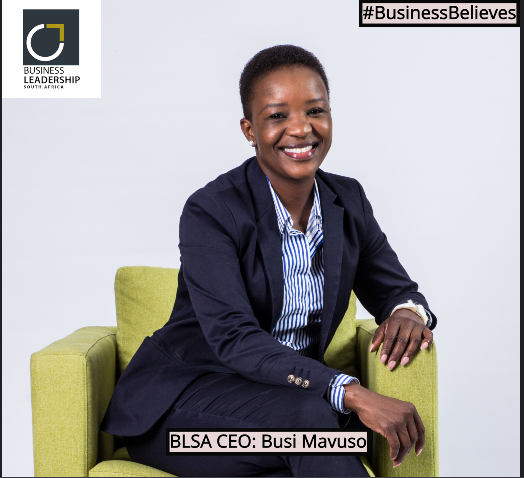 Mavuso has been the BLSA Chief Operating Officer, since November 2017 and will take over from Bonang Mohale who has led BLSA since June 2017.

Before joining BLSA, Mavuso was a Managing Director of the Black Management Forum, having been with the organization for eight years and having started out as the Chief Financial Officer.

In 1995, Mavuso began her career in the banking industry before moving on to work in fields such as healthcare and telecoms. She has a Masters in Business Leadership from the Unisa School of Leadership, a postgraduate qualification in Management from GIBS and a BCompt Degree from Unisa.

She is also a member of the Association of Chartered Certified Accountants.

In accepting her new role, which she said was “an honour and a privilege”, Mavuso said that over the past few years South Africa had been through a very bad period of corruption and malfeasance, partly because business did not provide leadership. “South Africa is currently in a dire economic position and I’m looking forward to leading business in implementing the necessary interventions to enable us to play a constructive role in the capacitation of the state and the acceleration of inclusive socio-economic growth,” said Mavuso.

‘Sis’ Busisiwe is younger, cleverer, much more hardworking and tempered better than me. I am personally delighted to be handing over the reins to such an outstanding leader,” Mohale added, who is retiring to pursue a life-long dream of becoming a farmer

Member of the BLSA Board, Nicky Newton-King said that Mavuso was uniquely positioned to lead BLSA at this critical time in the country. “We look forward to working with Busi as we raise the level of business engagement on the most important issues on the national agenda,” said Nicky.

About BLSA:
BLSA represents the CEOs of the largest companies in South Africa and falls under the apex organisation Business Unity SA (Busa), engages key players, including civil society and labour, to facilitate and promote dialogue with the government and other stakeholders.